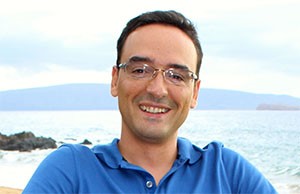 Ricardo Vasconcelos, Ph.D. (UCSB, 2010) is an associate professor of Portuguese and Brazilian literature and culture, as well as Portuguese language. His areas of research and teaching include 19th to 21st-century Luso-Brazilian poetry and prose; representations of national identity in Luso-Brazilian cinema and music; textual scholarship; the use of multimedia in foreign language learning; program development. He is the author of Campo de relâmpagos – Leituras do excesso na poesia de Luís Miguel Nava, among other publications. He is currently researching on topics of Luso-Brazilian Modernism, anthologies of 20th-century poetry, and the redescription of Portuguese national identity in a time of financial crisis.