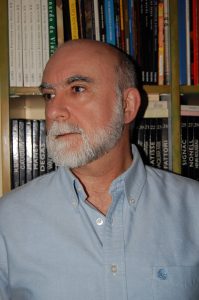 Pedro Ruiz Pérez is an Early-Modern Hispanic Literature professor at the University of Cordoba, Spain. Among his numerous interests, his expertise has driven him into areas related to Early-Modern Spanish literary genres, authorial networking, book history, and the exchange of texts. He is a co-founder of the research project “Grupo PASO” (1989-present), and his contributions were essential for the publication of five canonic poetry monographs (La silva, Oda, Elegía, Epístola, and Égloga). Other projects led him to the Early-Modern editorial practices, production, and distribution of texts. His best example of that branch of study is La rúbrica del poeta (The Poet’s Rubric), where he approaches the figure of an author from a material-writing perspective in several books by Garcilaso, Quevedo, or Cervantes. Finally, he has published editions from authors such as Fernán Pérez de Oliva, Juan Boscán, el duque de Rivas, and Pedro Espinosa. With more than 150 journal entries and publications, Pedro Ruiz Pérez is one of the most relevant critics to understand the Spanish Early-Modern period and its literature.