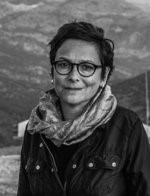 Jennifer Leeman is the Director of Graduate Programs and a professor in The Department of Modern and Classical Languages at George Mason University. Her research focuses on the sociopolitics of language, with particular attention to multilingualism, Spanish in the US, and the teaching of Spanish as a heritage language. Her work is interdisciplinary and employs the theoretical frameworks and methodological approaches of critical applied linguistics and sociolinguistics while also engaging the fields of education, Latinx studies, language policy, and linguistic anthropology. Leeman has published extensively on the interplay of ideologies of language, race and nation in the US, the role of Spanish in Latinx identity, multilingual language policy and politics, and critical pedagogical approaches to teaching Spanish. In addition to her faculty position at Mason, Leeman holds a Special Appointment to the US Census in the Center for Survey Measurement’s Language and Intercultural Research Group. Leeman’s current projects include: Speaking Spanish in the US, an interdisciplinary book under contract at Multilingual Matters (with Janet Fuller); a comparative analysis of census language questions, ideologies of identity and language policy in the US and Canada; an examination of student ideologies of identity and belonging in mixed L2/HL classes (with Ellen Serafini); and a chapter on heritage speakers of Spanish & ethnoracial identity in Spanish study abroad (with Meagan Driver).