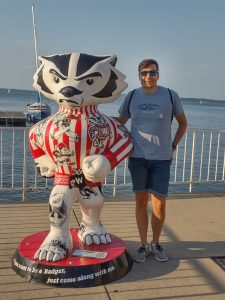 My name is Jorge Hernández Lasa and I am an ABD student in the Spanish and Portuguese Department at the University of Wisconsin-Madison. I majored at the Autonomous University of Barcelona where I participated in several projects that include, for instance, the new Spanish linguistic corpus for the Real Academia de la Lengua. After finishing my undergrad, I was selected to being part of the Ortelius Program between Barcelona and Seoul, South Korea, where I continued working on the literature field and Spanish as a Teaching Language. In 2016, I moved to Madison, WI, to be part of the Spanish and Portuguese Department at the University of Wisconsin-Madison, where I happily work under the direction of Professor Steven Hutchinson. My dissertation explores Early Modern Spanish poetic epistles inside a context that reaches areas of inquiries such as Greco-Roman literature and rhetoric, poetic form, and other material aspects of reading and writing