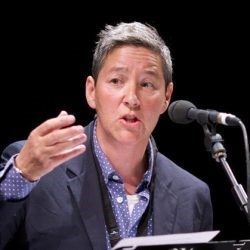 Jack Halberstam is a Professor of Gender Studies and English at Columbia University. Halberstam is the author of many books including:Skin Shows: Gothic Horror and the Technology of Monsters (Duke UP, 1995), Female Masculinity (Duke UP, 1998), In A Queer Time and Place(NYU Press, 2005), The Queer Art of Failure (Duke UP, 2011) and Gaga Feminism: Sex, Gender, and the End of Normal (Beacon Press, 2012), and Trans* (UC Press, 2017) and has written articles that have appeared in numerous journals, magazines and collections. Halberstam has co-edited a number of anthologies including Posthuman Bodies with Ira Livingston (Indiana University Press, 1995) and a special issue of Social Text with José Muñoz and David Eng titled “What’s Queer About Queer Studies Now?” Jack is a popular speaker and gives lectures around the country and internationally every year. Lecture topics include: queer failure, sex and media, subcultures, visual culture, gender variance, popular film, animation. Halberstam is currently working on several projects including a book titled WILD THING on queer anarchy, performance and protest culture, the visual representation of anarchy and the intersections between animality, the human and the environment.